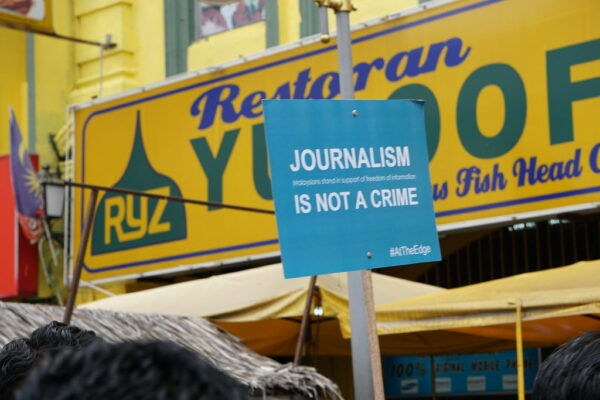 On September 28, Avaz Hafizli, a journalist from an online news platform Kanal13 was harassed and beaten by the local security guards while covering the opening of a new restaurant in the capital of Baku.

Hafizli, arrived at the opening of Deyirman restaurant but was quickly stopped by the security guards. According to reporting by Turan News Agency, Hafizli asked the security guards to confirm whether the newly opened restaurant indeed belonged to the head of Yasamal administrative district, a government official and why ordinary citizens were not allowed in

Hafizli was live-streaming the encounter but the stream ended abruptly after the security guard resorted to violence.

The journalist told Turan News Agency that he was taken inside the garden of the restaurant where after guards’ attempt to bribe him, the exchange turned violent.

Hafizli called for help and managed to call the police. At the police station, the two sides wrote their individual statements but even there, Hafizli told Turan News Agency the restaurant representative kept threatening the journalist.

The following day, Hafizli went to a hospital where after a medical check-up he was told that his arm was broken.

The journalist complained to the Ministry of the Interior asking for an investigation and due punishment in the case of the perpetrators of the attack and the subsequent injury.

Kanal 13 is an online video news platform broadcasting from its YouTube channel to its close to a million subscribers. The channel was created in 2008.

In 2014, Kanal 13 was subject to a government launched an investigation that was targeting all independent, international, and opposition civil society organizations, including organizations as IREX and Kanal 13. At the time, the manager and founder of the channel Anar Orucov (brother of Aziz Orucov) were in charge of the office and the channel.

As part of the country-wide crackdown, Kanal 13 office was searched, documents confiscated. Fearing persecution, Anar Orucov fled the country with his family with the support of an international organization while Aziz Orucov stayed behind to continue managing the channel and the projects.

Kanal 13 has also been subject to online attacks. In March of 2017, a report released by Amnesty International, “False Friends- how fake accounts and crude malware targeted dissidents in Azerbaijan” detailed how Kanal 13 was among those targeted when its internal communications were accessed for over a week.

Two months later, the channel’s director Aziz Orucov was detained and later rearrested while the office of the channel was searched and equipment was confiscated.

On February 11, 2020, a suspended sentence against Aziz Orucov, editor of the platform, was dropped by the Baku Court of Appeal.

Orucov was arrested during the criminal investigations against non-governmental organizations in Azerbaijan. He was arrested in 2017, but released in 2018 on a suspended sentence. The sentence was until February 2021.

Orucov took over the managing of the platform after his brother Anar Orucov fled the country in 2014 amid threats of persecution.

The platform’s website kanal13.tv is on the list of blocked websites according to the most recent OONI measurements.

Earlier in September Hafizli reportedly chained himself to the gate of the Prosecutor General’s Office. The action was taken in protest of government inaction against homophobic incitement by blogger Sevinj Huseynova, whose recent videos in which the blogger openly calls for violence against trans community members have gone viral. Hafizli who is a member of the LGBTQI+ community in Azerbaijan attempted suicide on September 5 as a result of Huseynova’s videos.

[Update] The spokesperson for the Ministry of the Interior Ehsan Zahidov said following the investigation, all men identified in the video were arrested and questioned. The men were family members of the soldier mentioned in the original tweet.

In Azerbaijan, a man was beaten over a social media post that was not even his.

On April 28, a group of men beat up social media humorist Fuad Rasulzade. In the video widely distributed across social media platforms, the men are seen twisting his arms, hitting him, and accusing him of disrespecting a soldier, who was killed during the second Karabakh war in a social media post.

Eventually, Rasulzade was let go. After a medical examination, he was discharged without major injuries.

The Ministry of the Interior said it was informed of the incident and will investigate the men who beat up Rasulzade.

Turns out, the post over which Rasulzade was attacked was not even his and was shared first by another friend. After telling Rasulzade that he has been receiving threats, Rasulade wrote on Facebook that the idea belonged to him. The original post was shared a month ago, on March 27.

January 29, 2021 – Resident of Mingachevir city, Sardar Asgarov was taken to local police, beaten, and forced to apologize over his criticism of the local government officials on social media.

In an interview with Meydan TV, a Berlin-based online news platform, covering Azerbaijan, Asgarov said, a man showed up at his door on January 26 in the morning telling him, he was coming from the Mingachevir Employment Center. Once Sadigov stepped outside of his door, three other men showed up and attacked Sadigov.

According to Sadigov he was then taken to the local police where the city’s deputy chief, Javid Talibov slapped him, used derogatory language and told him who was he to criticize local administration, and the head of the police on social media. “He then forced me to kneel, and to apologize while Talibov was filming me with his phone,” Sadigov told Meydan TV.

The same day, Sadigov was fined and let go.

Sadigov said both his mobile phones that were taken by the police were formated and his accounts on social media platforms were deleted. “The deputy chief told me if I criticize local authorities again, he will find a way to arrest me.”

In the meantime, Mingachevir City Police told Meydan TV, Sadigov was detained for hooliganism and fined for 50AZN and that Sadigov’s claims about violence and threats he was subject to at the police are not true. Similarly, the city administrative office refuted Sadigov’s claims that he was detained on the orders of the office. The office also said they consider Sadigov’s comments on social media as slander.

Sadigov’s posts on social media criticized one of the city government departments for withholding salaries of women employees, and not helping them during the pandemic. Sadigov also criticized the city police for preventing these women from protesting.

While in detention, he was beaten and humiliated. After his release, he was threatened by the Deputy Police Chief Fakhri Alsanov.

Aliyev said he was written countless letters to the president, about the head of the administrative district. When he did not hear back, he took his complaints online.

Aliyev was accused of disobeying the police.

Detentions over social media comments and posts are not uncommon in Azerbaijan. Just this month, a number of social media users were detained over their posts on social media platforms, criticizing the police and the fake flashmob that was organized in the capital of Baku in support of the Azerbaijani police.