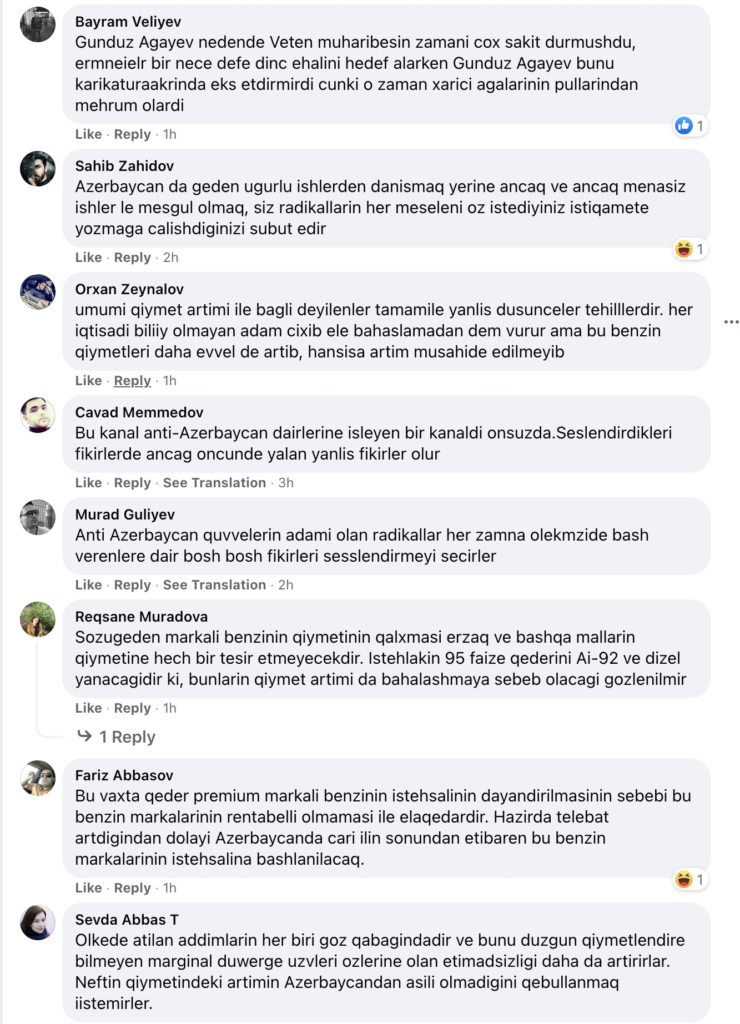 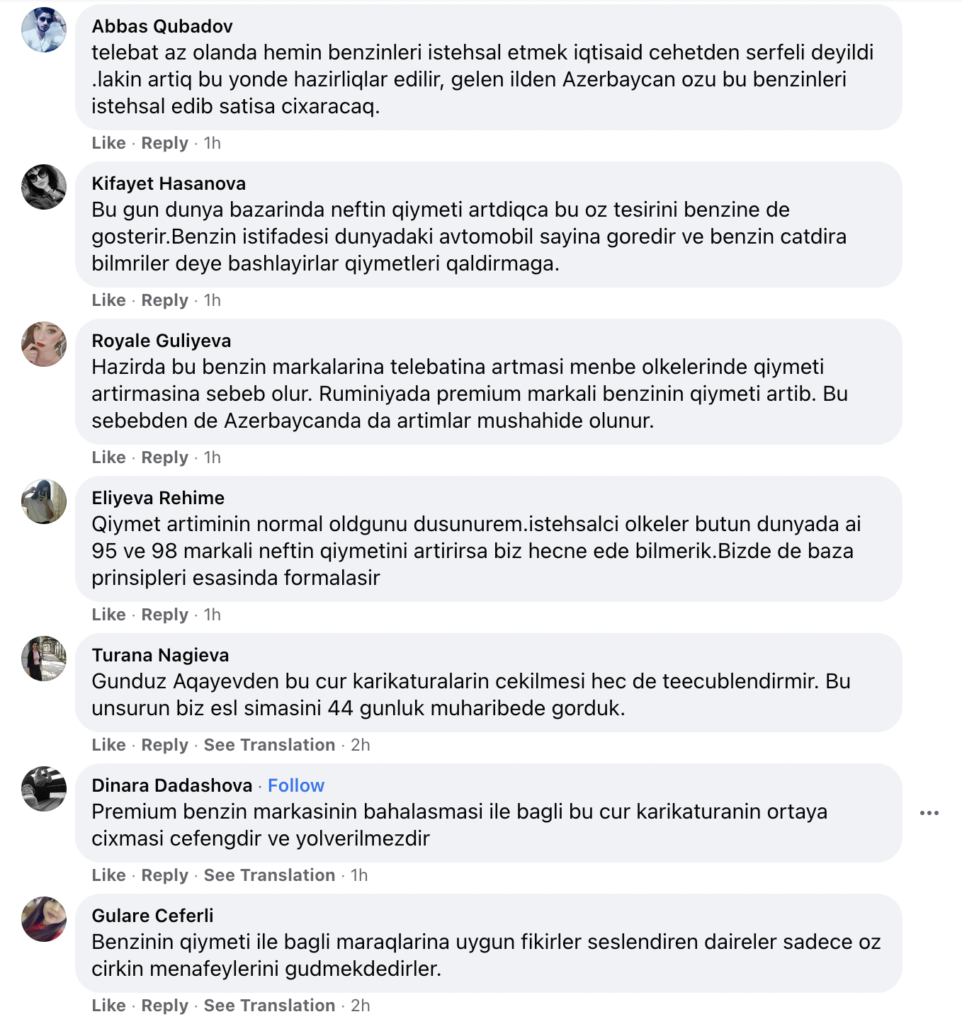 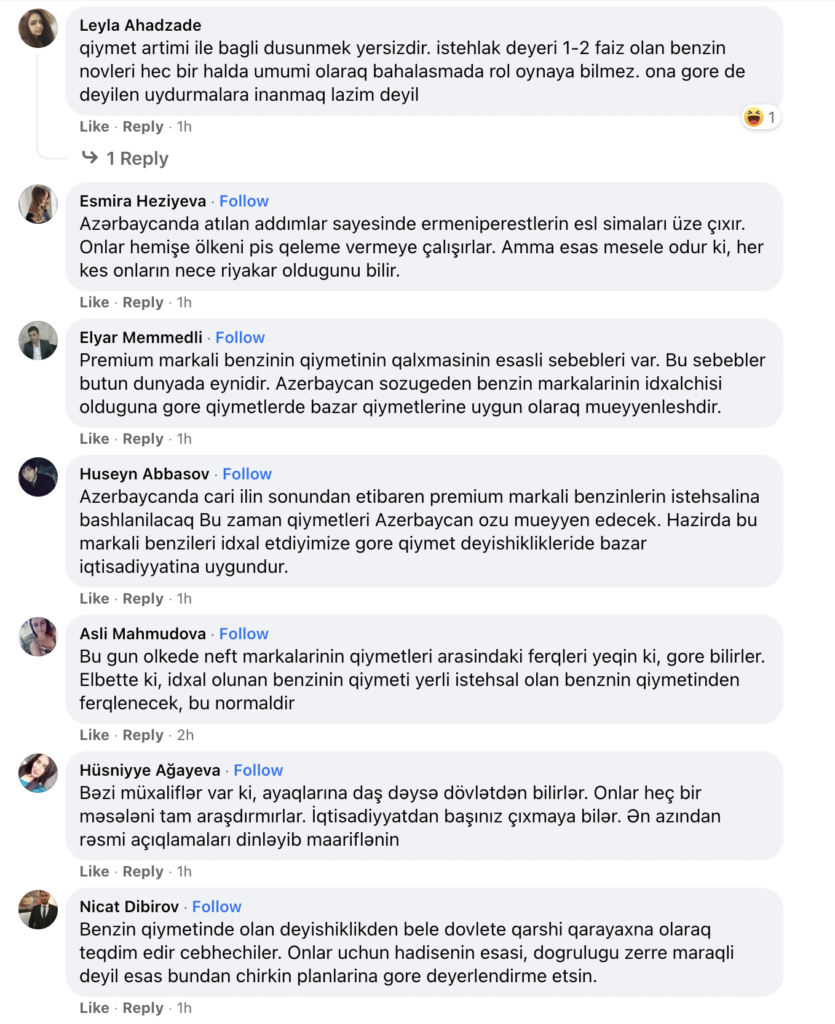 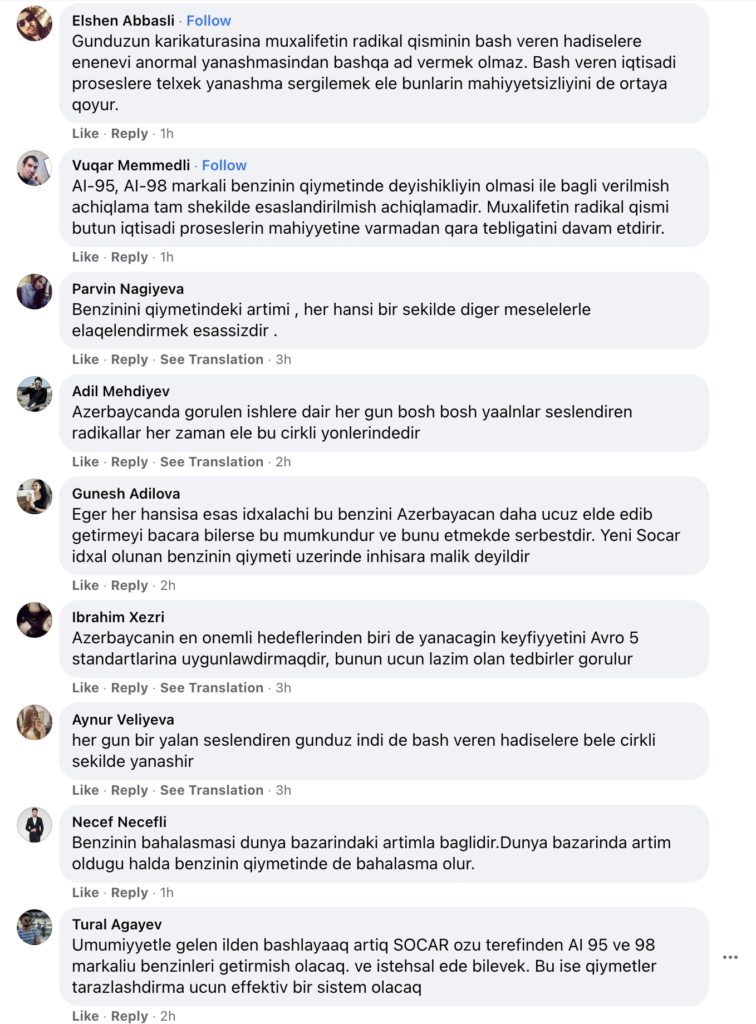 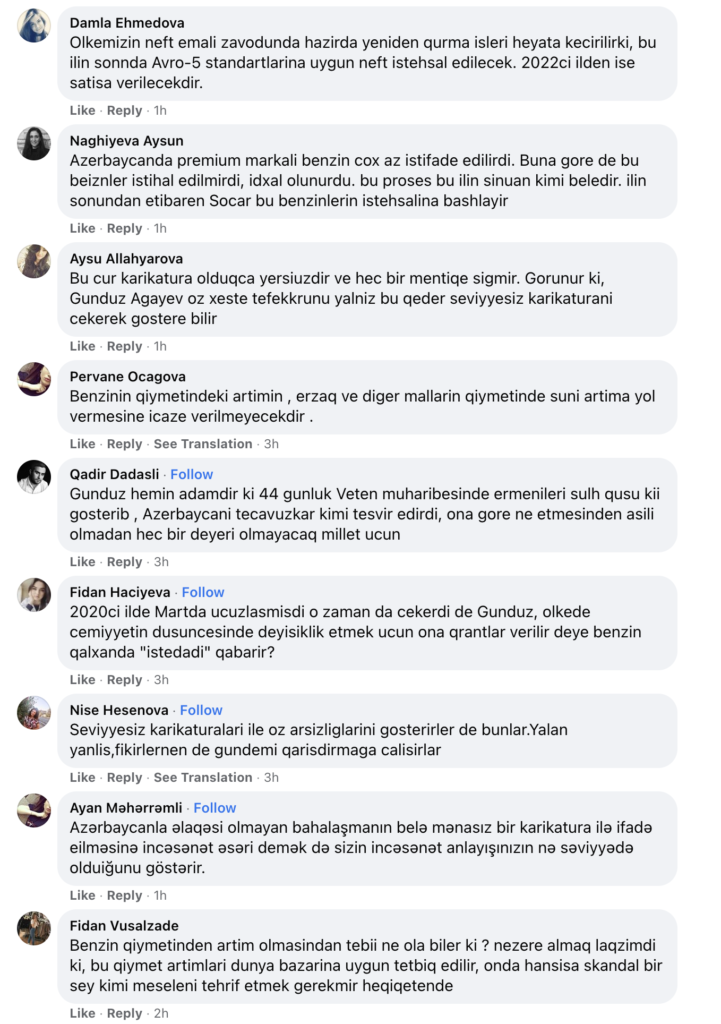 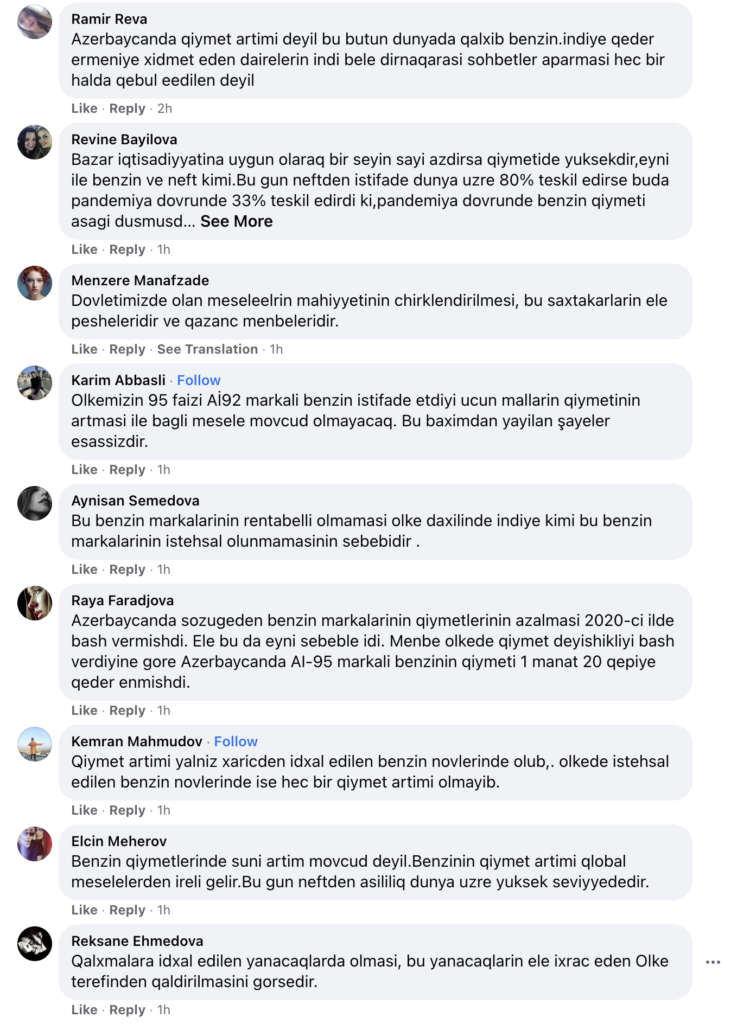 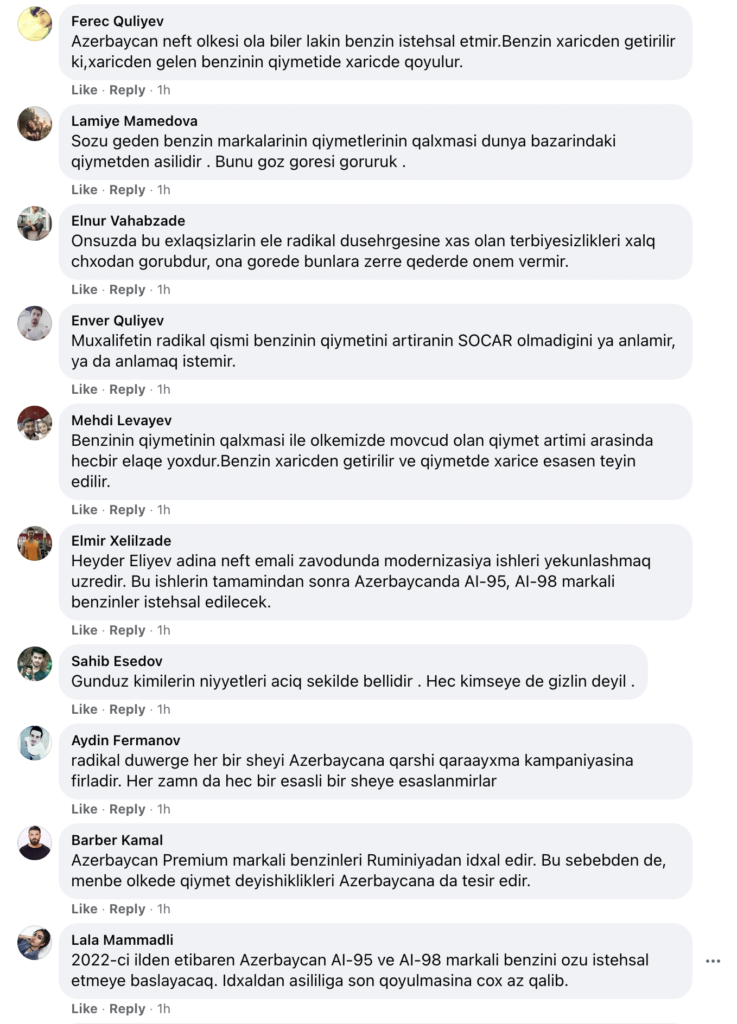 This month, a series of articles published by The Guardian newspaper revealed how leaders across the world, used Facebook loopholes to harass their critics at home. And how despite having information about these violations, the platform lets these cases sit sometimes for months on end if not more, instead choosing to deal with more high profile cases. “The investigation shows how Facebook has allowed major abuses of its platform in poor, small and non-western countries in order to prioritize addressing abuses that attract media attention or affect the US and other wealthy countries. The company acted quickly to address political manipulation affecting countries such as the US, Taiwan, South Korea, and Poland, while moving slowly or not at all on cases in Afghanistan, Iraq, Mongolia, Mexico and much of Latin America.”

The Guardian investigations show that Azerbaijan was on the list of neglected countries. If it wasn’t for Facebook’s former employee Sophie Zhang memo published in September of last year, those inauthentic pages that Facebook removed 14 months later (once the memo was out) likely would have stayed.

But even though those pages have been reportedly removed, hundreds if not thousands more continue to target independent media in Azerbaijan. AIW covered the story of Meydan TV here and The Guardian uncovered a similar pattern of targeting in the case of Azad Soz. AIW now presents its findings on targeting Mikroskop Media, a Riga-based online news platform that covers Azerbaijan.

Mikroskop Media shared with AIW the list of Facebook posts where the platform received a high volume of comments. The preliminary investigation indicates that the Facebook page of Mikroskop Media was also targeted by hundreds of inauthentic Facebook pages set up to look like personal accounts flooding the posts with comments supportive of the ruling government and its relevant decisions.

On March 24, Mikroskop Media shared the following post on its Facebook page. The post looks at the total number of citizens who have received vaccination so far in Azerbaijan as well as the total number of vaccines on March 23. This post received over 1.6k comments. AIW looked at 550 comments and almost all of these comments were posted by owners of pages that posed as users on the platform.

Another post investigated by AIW was one posted on March 11, indicating the total number of businesses who have applied to the authorities to launch their businesses in Karabakh. The post receives over 400 comments. Having analyzed 200 of them, AIW was again, discovered that all of them were pages.

On April 5, Mikroskop Media shared a link to a story they published about this investigation that was first originally published by VICE on March 29, exposing how little known Berlin-based television channel was part of a “lobbying strategy to polish Azerbaijan’s image in Germany” thanks to large sums of money paid through bribery of certain politicians. The story shared by Mikroskop Media on its Facebook page received almost 400 comments. AIW analyzed these comments, and once again, with an exception of a few profiles (although these too were suspicious given the lack of any recent activity on their profiles) that almost all of the comments were posted by inauthentic Facebook pages.

At other times, Mikroskop Media’s Facebook page was targeted by troll accounts. This was especially the case in this example – on November 12, 2020, Mikroskop Media shared an infographic, about the number of times, Azerbaijan’s national constitution was amended. Among the 385 comments that were analyzed, a relatively high number of these comments were posted by Facebook profiles. A closer look at these profiles showed while some of the owners were employees at the state universities and government institutions, some were not authentic accounts at all. The majority of the comments once again were in favor of these changes, expressed pride in the country and the president’s decisions as well as accused the media platform of bias and unfair reporting.

AIW would be happy to assist Facebook’s threat intelligence team in investigating the “coordinated inauthentic behavior” that AIW has observed and has shared in its reporting so far, but the main question still lingers, will it take notice?

What does art, shopping retail, web design, sports, cosmetics, and e-commerce website have in common? Absolutely nothing, except these, are all various categories available on Facebook when setting up pages. Since 2019, Facebook removed the limit on the number of pages a user can set up. Unfortunately, Facebook did not take into account, how this innocent feature update, if in the wrong hands, can do harm. In the case of Azerbaijan, this is exactly what happened, when Meydan TV, an independent Berlin-based news platform, shared a call for applications for a program, held in partnership with Brussels-based human rights organization, International Partnership for Human Rights in February 2021.

The project aimed to bring together journalists, writers, bloggers, and content creators from Azerbaijan willing to produce thematic media pieces on civic, social, cultural, and political issues from the country. It was an opportunity for young content creators to get some international exposure and work with professional mentors.

Meydan TV shared the announcement via its Facebook page [the website is blocked in Azerbaijan since 2017]. Similarly, IPHR shared the announcement on its website. Very quickly the post received hundreds of comments. Most if not all were negative. The commenters accused Meydan TV and IPHR of involving Azerbaijani youth in pro-Armenian propaganda. These users, described IPHR, as an organization that is a long-known enemy to the Azerbaijani people and the state. Accusing of brainwashing of the youth, IPHR and Meydan TV were blamed for the radicalization of youth and for their openly Armenian agenda.

IPHR has worked in Azerbaijan and country-related projects for almost a decade, supporting civil society on the ground.

IPHR shared the incident with AIW, and provided a list of screenshots taken from the post on Facebook. AIW, analyzed the screenshots of all comments to see whether these were genuine users, trolls, or bot accounts. On Facebook, although a user can create and manage multiple pages, only one personal account is allowed according to Facebook’s Community Standards. Whereas Twitter allows you to toggle between up to five accounts [but there are no pages there]. Finally, to clarify the terminology about bots and trolls, according to IJNET:

A bot is an automated social media account run by an algorithm, rather than a real person. In other words, a bot is designed to make posts without human intervention.

A troll is a person who intentionally initiates online conflict or offends other users to distract and sow divisions by posting inflammatory or off-topic posts in an online community or a social network. Their goal is to provoke others into an emotional response and derail discussions.

Trolls may rely on bots to amplify their message.

A botnet is a network of bot accounts managed by the same individual or group. Those who manage botnets, which require original human input prior to deployment, are referred to as bot herders or shepherds.

In order to identify, whether any of the accounts actively engaging under Meydan TV’s post fit the descriptions above, AIW simply checked the names of users on Facebook. All of the names AIW analyzed were set up as pages on Facebook between July 2020 and February 2021. Only one name, among the list of analyzed users, was an actual profile, albeit likely a mistake or intentional, as it had only two posts made since July 2020, when the profile was set up.

In October of last year, Facebook whistleblower Sophie Zhang wrote a memo about how the Facebook company was ignoring manipulation of its platforms by political parties and heads of government. Weeks after Zhang was fired and leaked this information, Facebook removed more than 1,000 accounts and close to 8,000 pages which were part of a massive network of fake activity connected to Azerbaijan’s ruling party reported BuzzFeedNews. At the time Facebook said the network was likely operated by the youth branch of the ruling New Azerbaijani Party. These accounts and pages were used “to post comments that attacked opposition figures and independent media” and boost the government’s image.

According to BuzzFeedNews, Nathaniel Gleicher, Facebook’s head of security policy, “said the close to 8,000 pages used in the operation were set up to look like personal profiles and were used to leave comments. “This network appeared to engage individuals in Azerbaijan to manage pages with the sole purpose of leaving supportive and critical commentary on pages of international and local media, public figures including the opposition, and the ruling party of Azerbaijan, to create a perception of widespread criticism of some views and widespread support of others.”

What is striking however is despite the leak that was first flagged in 2018 by Sophie Zang, nothing was done about it. Only after she leaked the information that Facebook took measures by opening an internal investigation leaving Zang’s name out of it. But judging from attacks on Meydan TV’s post, the activity continues while damaging the reputation of others.