[Update] On March 5, the Court in Baku sentenced Ibrahim to one year and three months.

[Update] On February 17, during his hearing, Nijat Ibrahim, once again refuted the claims that he was intentionally spreading the coronavirus when he was arrested in July 2020. “When police arrested me, I was wearing a mask and gloves. Without giving an explanation, they twisted my arms and handcuffed me. After bringing me to the police station, they tested me for Covid 19 and told me I tested positive. If this was really the case, then why did they not isolate my family?” said Ibrahim during the hearing. According to Azadliq Radio, the prosecutor was expected to hand in the final sentence on February 24. Ibrahim is facing up to three years in prison if found guilty.

On July 20, activist Nijat Ibrahim, posted on his Facebook, that he was going to protest outside the Presidential Apparatus in the capital Baku. The main message of his one-man protest was calling on the President of Azerbaijan, Ilham Aliyev to resign. The activist also said he demands that the government demolish all of the monuments of Haydar Aliyev. 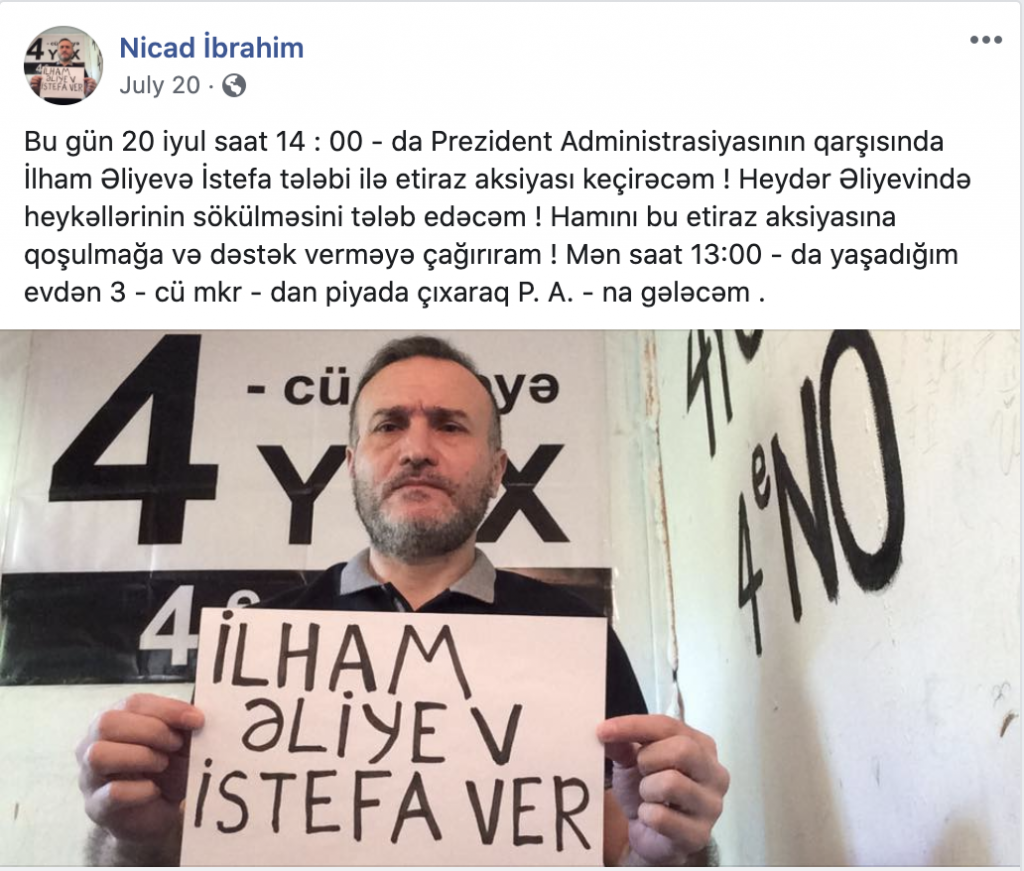 However, shortly after leaving his home, Ibrahim was detained by the police and charged with Article 139.1.1 of the Criminal Code (Violation of anti-epidemic, sanitary-hygienic, or quarantine regimes) specifically with spreading the virus. On July 21, Ibrahim’s wife, received a phone call informing her, her husband tested positive despite him never taking the testOn July 22, Nasimi district court found Ibrahim guilty and sentenced the activist to three months in pre-trial detention.

On July 28, Ibrahim’s lawyer filed a motion requesting the Center for Dangerous Infections at the Ministry of Health to provide information about the date Ibrahim was tested, and the results were made available to him. The court dismissed the motion.

Scores of political activists have been accused of a similar crime over recent weeks.

religious activist claims his arrest was over his social media posts